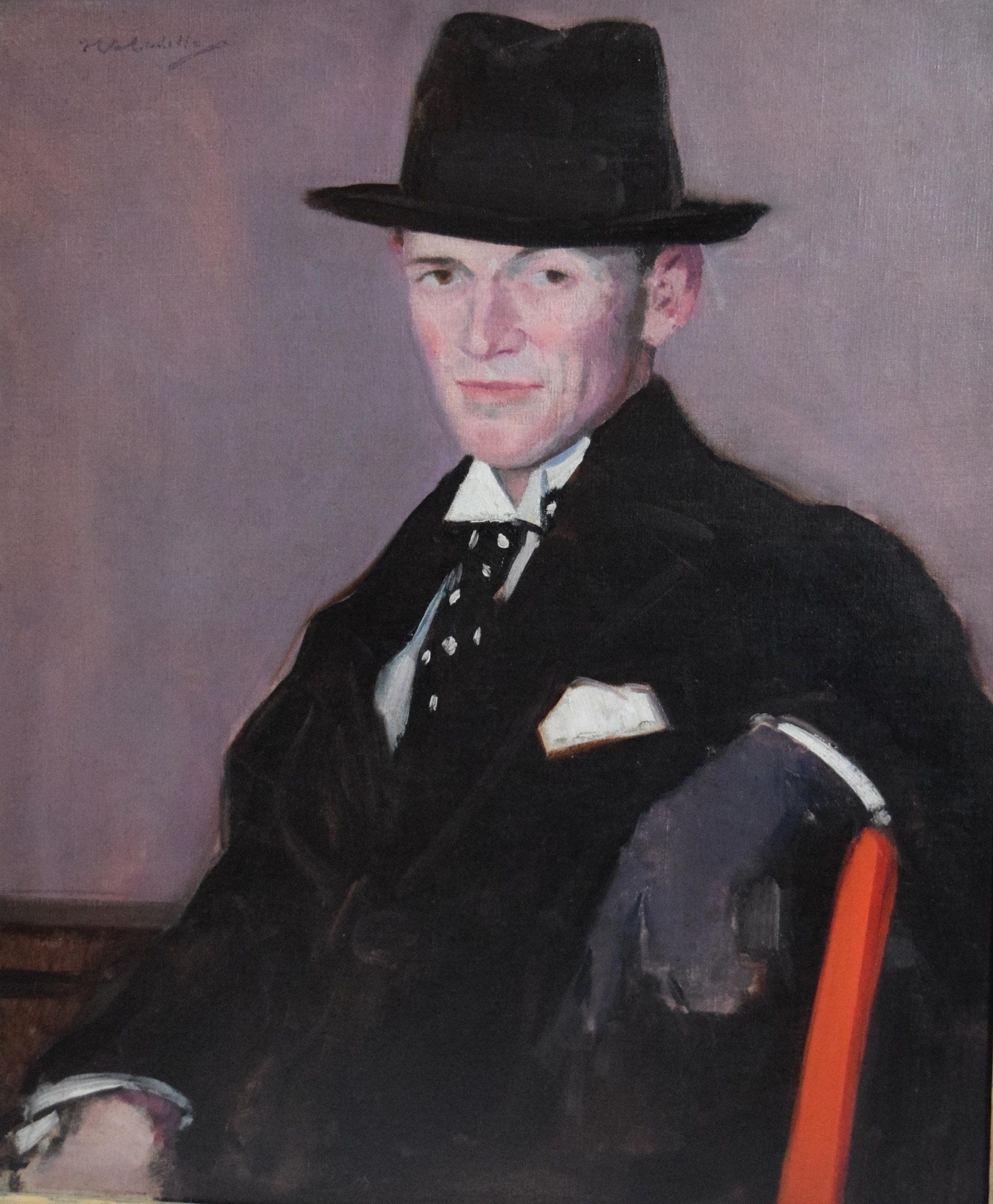 Verso labelled: 11385
60...
Another describing it as a portrait of William 'Spanish' Macdonald
The Scottish Gallery
The Dean Gallery

This lively portrait shows an elegant and debonair William Macdonald in
a relaxed pose, his hat at a jaunty angle. The background is the distinctive mauve wall colour of Cadell's studio at Ainslie Place where he lived from 1920. He has reduced the palette for the sitter predominantly to black and white, with his characteristic use of red in the chair back against which the gloved hand rests creating a dynamic angle and a stark contrast. Whilst
the face is subtly modelled, the black of his jacket and hat is painted with supressed shadow, flattening the contours to an almost two-dimensional surface, recognising an Art Deco aesthetic which Cadell was to take further in his still life paintings.
Cadell's male portraits are comparatively rare whilst his paintings of glamorous female subjects abound and the image of a lady in black becomes a recurrent theme. We see this exemplified in Cadell's Portrait of a Lady in Black, circa 1921, in the collection of the Scottish National Gallery of Modern Art. It is interesting that he is here, to some extent, giving a similar treatment more unusually to a male sitter.
Cadell was evidently pleased with the effect he achieved in his portrait
of Macdonald as it appears hanging on the wall above a sofa in his painting Interior: The Red Chair, circa 1926. The interior is that of his studio at Ainslie Place, suggesting that Macdonald's portrait hung there for a period of time at least. Both paintings were shown at the Cadell exhibition at the Scottish National Gallery of Modern Art in 2011-2012. (see Cadell, Alice Strang, page 41, ill.36).
The paintings of William Macdonald by Cadell suggest a close comradeship. Macdonald sat for him at least twice and as well as this striking portrait, Cadell also painted him in full Spanish costume for the painting The Matador, 1914, (see F.C.B. Cadell, Hewlett and Macmillan, page 66, ill.63). A photograph in the archive also captures him in Spanish dress suggesting that this flamboyant attire was a favourite of Macdonald's. Cadell was also a close friend of William's brother Herman Macdonald who is depicted in a portrait entitled The Poet, painted in 1912 and later submitted as Cadell's RSA diploma work. (op. cit. Hewlett and Macmillan, page 50 ill.40).

Thank you for your enquiry.

We will get back to you soon.